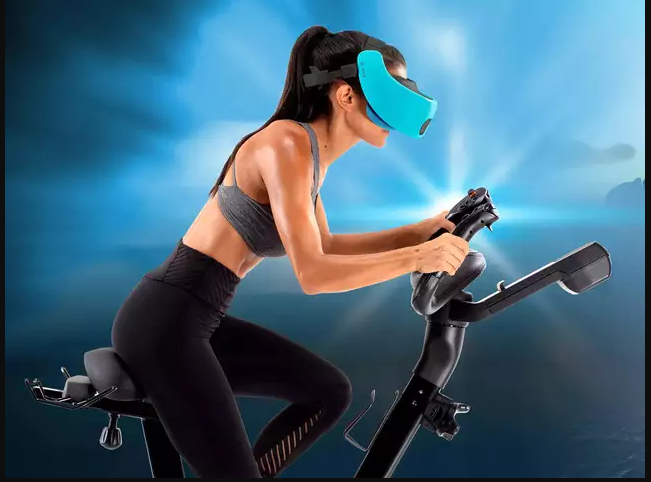 “A morning workout is a blessing for the whole day.”
-Anonymous|

True that starting a day with a workout is the best gift one can give to one’s body every day. Augmented Reality (AR), a technology that got an identity with a popular game Pokemon Go is revolutionizing the industries including healthcare, education, and farming. AR will now transform how an athlete or a runner achieve the workout objectives. Running on a treadmill or even a morning walk often gets boring for many of the runners. A runner keeps waiting for the end of the workout session. What if this session turns out to be interesting like never before!  But how is it possible?? This is possible using the AR glasses.

AR glasses allow the users to work out more smartly by simulating a real environment with senses through computer-generated sensors. A user gets real-time data that can be analyzed, shared and used for performance improvement when working out with AR glasses. AR glasses make sure that a user works harder every time.

A user will get the information regarding the ideal heart rate/power and the cadence. The glasses will also tell a user the time limit for which the workout to do. So, the user does not need to unnecessarily sweat out on a single workout. After the session is over, the user will have rich data that can be shared and analyzed with the coaches to improve the workout performance to another level.

What makes AR glasses a standout solution for physical fitness? Several benefits will compel to use AR glasses for their workout sessions:

According to research, a workout more than 7.5 hours a week may result in mental issues such as depression, anxiety, and an overstressed body! While working out, individuals often forget about the parameters such as the intensity and duration of a workout. “Larger is not always better”. The AR glasses will let a user come out of this issue.  The user will get the real-time data about the intensity of the workout session as per the user age.

A busy schedule… No time to work out? The findings from hrmagzine UK indicate that over 52% of the employees do not have enough time to work out! AR for physical fitness will overcome the challenge of reaching to a gym at fixed times. The flexibility and a next-generation immersive AR experience give rise to “at- office” and “at- home” workouts. One of the interesting facts is that AR glasses will even let a user interact with the trainer regardless of the location of the trainer!

Not motivated to work out? You often promise yourself to hit the gym every day but you fail to do so. The AR apps and devices are here to motivate by letting the user record and share their workout data! Users can compare and compete with each other on measures such as time taken, kilometers run and workout score. The integration of app with social media further drives the motivation and competition in the users.

In addition to AR glasses there are several AR apps also that motivate the users to move and explore:

Zombies Run – A fun AR workout that takes out a disaster survivor from the users. Zombies Run is one of the leading smartphone fitness apps that accompanies its users during a walk or jog. The sounds and visuals will never make the user feel bored. The creative storytelling theme and the creative app elements keep the user motivation high.

INGRESS – Yet another AR app that motivates the users to run hard. Remember the Pokemon Go game that drove millions of people crazy for catching the Pokemons? The same company developed the app INGRESS. There are two teams in the game with a common goal. The teams travel across real world locations and landmarks. Movement and exploration hence reach their peak with this app.

The above graphs show a huge surge in chronic health issues such as obesity and diabetes. Aren’t these statistics enough to think of the innovative workout ways that can motivate and excite people to work out hard? Researchers are continuously looking for the ways that can control the health epidemics. AR in physical fitness industry is yet to grow but AR and VR market by the year 2030 are foretasted to hit $814.7 billion.

AR glasses for physical fitness are one of the promising technologies. These glasses may emerge as a motivation for millions of people who want to stay fit and rock the world!

Open Your Next Fashion Store In Metaverse, Here’s Why