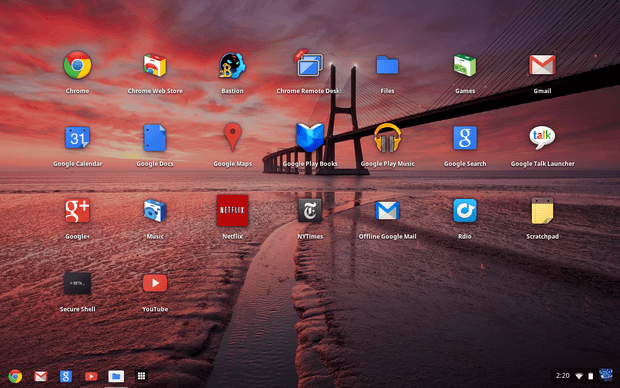 Google Chrome operating system is a web-based OS that is created by Google and was first introduced in the year 2009. It is based on the Linux kernel and it uses the Chrome browser as its principal user interface. As a result of this, Chrome OS supports web applications. It comes pre-installed with Chromebooks (laptop), Chromeboxes (desktop), Chromebits (a small computer that plugs directly into a TV or monitor with an HDMI port) and Chromebase (all-in-one device that consists of a monitor and computer). However, you can download it in a USB and run it on any windows or Mac computer. Google Chrome OS is very streamlined and requires modest hardware, making the cost of computer using this OS less as compared to the ones using Windows or Mac OS.

Most of the functions in a Chrome OS take place in the cloud which makes it less complicated when it comes to hardware requirements, and therefore it reduces the need to focus on drivers. Since most of the time is spent across the web therefore most of your time working with the Chrome OS will be spent in the Chrome browser. Firefox or other browsers are not available in the Chrome OS.

Now let us discuss some of the features of Chrome OS:

Chrome operating system is based on a complete computing environment. It has hardware specifically designed for it from Google’s manufacturing partner laptops. At present the Chrome OS devices include Chromebooks from Samsung, Acer, HP and Lenovo.

Open source and Linux based

Chrome OS is open source and is Linux based, which means that anybody can see the code underlying the OS. Although this OS is pre-installed in Chromebooks and Chromeboxes, you can however install it or any x86-based PC or systems running the ARM processor.

Besides the file manager and the Chrome browser, all the applications that run on Chrome OS are web based. This also means that you cannot install proprietary desktop software such as MS office or Adobe Photoshop in it, as they are not web based applications. However, anything that runs on the Chrome browser will run on the OS. So if you spend most of your time in the browser, using Google docs, Microsoft web apps, doing online research and using other web based systems, then Chrome OS will be perfect for you.

Designed for speed and simplicity

Chrome OS combines web apps and pages in one roof and has a very simple design. And since Chrome OS primarily runs web pages hence it has low hardware requirements and doesn’t use a lot of system resources. It is basically designed to get you to the web as quickly and as easily as possible.

With Chrome OS you do not have to worry about viruses, malwares, security updates and scans, as the OS does all this automatically for you. It performs system self-checks at start up, offers guest log in and provides tons of other security features.

Internet connection may or may not be required

You will require an internet connection for most of the apps in the Chrome OS. However, some apps are built for offline use, like Gmail, Google docs and Google calendar. Many third party apps that includes games like angry birds and news apps like NYTimes, also work without an internet connection.

Is Chrome OS better than Windows or Mac? Comparing Chrome with either Windows or Mac is like comparing apples with oranges. They are very different and the biggest difference between Chrome OS and Windows or Mac computers is that for Chrome OS most of the processing is performed by cloud computers and web servers in a data centre. But if we talk of the Windows/Mac and Chrome OS debate further, then we should point out that Chrome OS has a long battery life. The hardware requirements are less demanding and hence the power requirement is also typically less.

Who should use Chrome OS?

Chrome OS is best for people whose major tasks are associated with using the web.  Chrome devices aren’t that powerful but are lightweight, which makes them suitable for travel. But if you need more computing powers in your laptop and also want it to download proprietary software then you shouldn’t go for it. A graphic designer would want to use Adobe Photoshop, which cannot be downloaded in Chrome OS and also doesn’t have an online version, making the OS unsuitable for the designer.  The OS gives you the option of using the in-built image editor and online apps like Pixlr, but if you are used to using photoshop then you will find it very difficult to adjust to this less powerful OS.

After all this discussion the bottom-line is that with so many applications in today’s world being already connected to the cloud in one way or another, using a lightweight and inexpensive devices for daily computing needs, makes sense. It is best for users who are switching to or already using Google apps. But on the other side users habitual of using Windows or Mac where they can install software’s, will find this OS too simple and light-weight to meet their needs.

Google in a blog post in August of this year stated that approximately one percent of all Chrome users on Windows, Mac and Linux were using Chrome Apps. Hence, in the next two years the support for Chrome Apps on non-Chrome OS shall be phased out completely. Later this year any new Chrome Apps that are published shall only be available to Chrome OS users. Apart from the killing of Chrome Apps on other platforms, another major thing happening is that, the Android Apps are coming to Chrome OS. And it is not just a subset of Apps but the entire Playstore that is coming to this OS. Yes, more than 1.5 million Apps will be coming to the platform that before today was just a browser. Currently a few Android Apps are available on the platform but in the future it is going to be the entire Google Playstore. With this merger, Google aims to provide the Chrome OS users with a seamless experience. The Android Apps live in the native Chrome OS window will make them look like a part of the operating system.

Chrome OS has also become the first ever platform to have desktop Android Apps. Yes, Android desktop Apps in the Chrome OS are a real thing now. With all this, we can say that Google has some big plans for Chrome OS and we can only wait and see how it goes.

How to build dApp on Solana in 8 simple steps?