What is 6 Degree of Freedom (6DoF)in Virtual Reality(VR)? 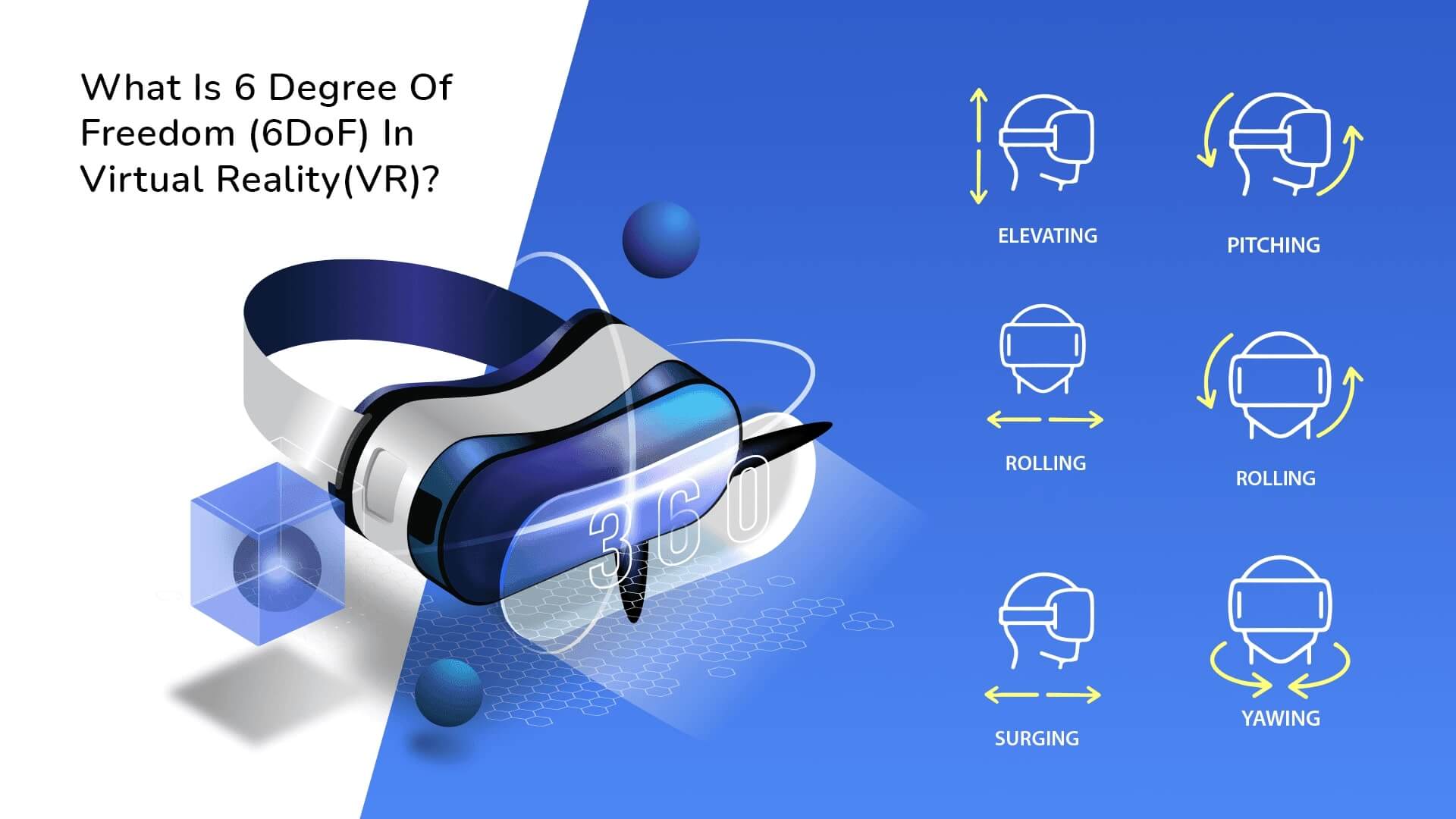 Ever heard about the Degree of freedom (DoF)?  Not the one which is the number of values in a final calculation in statistics but something related to Virtual reality.

Sounds a little complex? No worries, this blog gives a basic understanding of the 6 Degree of freedom (DoF) one of the building elements of VR.

Virtual reality is the use of computer technology to create a simulated environment. Ever saw someone playing the game on PSVR (Play station Virtual Reality Game)? The user is completely immersed in the game; their physical movements are also connected directly to the computer. The immersive VR feeling makes the user feel that they are present in the virtual gaming world! The magic of VR leaves the player stunned.

A high-quality immersive VR experience is possible because of the fact that the user can move within a virtual world.  Positional tracking comes into play in VR at this time.  Positional tracking (6 Dof) in VR lets the user reflect actions including jumping, leaning, or even ducking.  It is an important technology that makes VR a more exciting and immersive experience.

DoF is the number of directions an object can move in in a 3 d space. There are a total of 6 degrees of freedom. 3 DoF VR headsets are the ones that track the orientation of a user’s head. In simple words, the headset knows where a user is looking. The three axes in 3DoF include the Roll, Yaw, and pitch.  The 6 Dof, on the other hand, are the headsets that track both the position and orientation.  The 6 DoF, hence knows where the user is looking and where it is in the space.

The orientation and rotation in VR are defined with three values – X (Roll) y (Pitch) and z (Yaw).  When Roll- Pitch -Yaw combine the outcome is 6 DoF.  Three angles together are also known as the Tait-Byan angles.

As discussed above, 6 Dof is the successor of 3 Dof and offers 3 more directions in addition to Roll, pitch, and yawn. The additional three directions include – elevating, strafing, and surging.

The 6 DoF allows a user to move in the VR space rather than just standing at a single spot.

Considering the advancements in the world of Virtual Reality (VR), it is the 6DoF that lets users experience the events in the most realistic form. 6DoF, unlike 3 DoF, lets a user move in all directions making the experience as real as possible. When playing the shoot-em-up first-person game the character does not stand still rather it moves around, looks around, and shoots the zombies on the way! The game becomes fun when the character jumps and moves to avoid becoming the Zombie lunch. Such an exciting game experience was not possible without the 6 DoF.

To improve the immersive experience offered by augmented and virtual realities, it was essential for these technologies to shift from 3DoFto 6 Dof.  The 6 DoF VR sets offer an experience of moving freely and naturally in the virtual environment. It is because of 6 DoF that users get experience as real as possible.  With a 6 DoF VR gaming experience, a user is no longer restricted to tracking space and cameras. No long cables and everything in a 6 DoF world is the same as the real world! It is the 6 DoF that lets the players organize VR events and concerts that make a long-lasting impression on the customers. The freedom of movement.

Accuracy is one of the biggest desires of customers. The quality of the VR experience offered to customers can make or break the perception of these technologies. According to ABI research “by the year 2022, the VR devices with 6 DoF will constitute more than 40% of the VR market!”. An industry analyst indicates that 6 DoF VR devices offer a totally immersive experience that will make a long-lasting impression in the customer’s mind.

WorldSense is an exemplary technology that provides positional tracking to Daydream Standalone headsets. The 6 DoF headsets understand the movements of the user in a space without any external sensor. WorldSense is taking VR immersive experience to another level without a complicated setup.

The Virtual and Augmented realities are continuing to draw the audience into an immersive experience like never before! We at Queppelin have designers that have the potential to create unforgettable experiences for audiences worldwide.

Augmented Reality(AR) Technology on the Rise