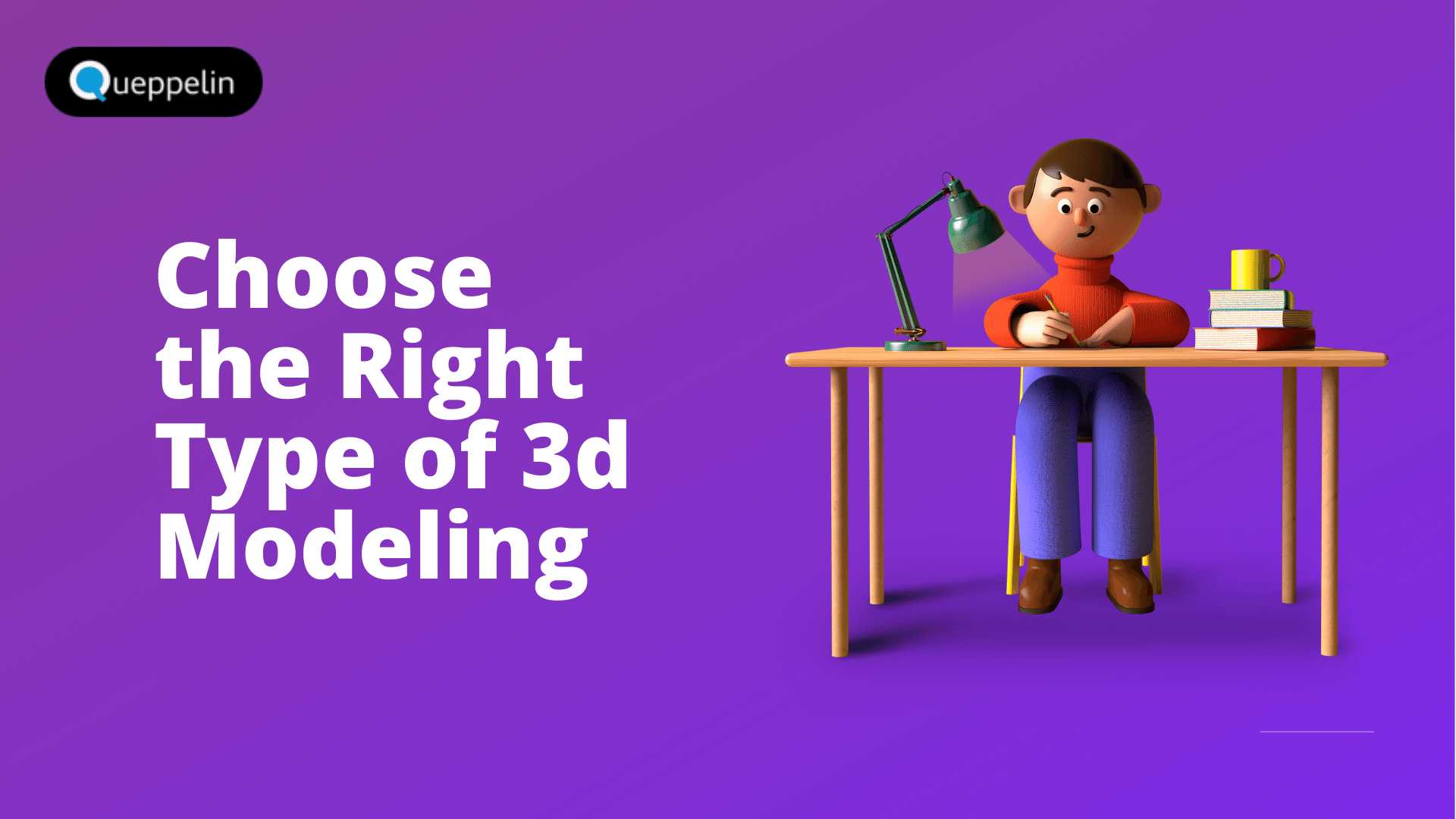 What is 3D modeling?

In layman’s terms, 3D modeling is the art of making a digital representation of any object in three dimensions through specialized software. The object is termed a 3D virtual model. A person who works with 3D digital models could be called a 3D sculptor or a 3D designer.

One of the most popular areas of 3D design and graphics is the video game industry, especially in the video games business. The best examples of this can be found in the popular Mass Effect and Call of Duty games.

Not all 3D computer graphics software is suited to video games, so it is important for people working in this area to have a certain level of experience in the design and implementation of video game models.

What are the Types of 3d Modeling?

In this blog, we will discuss 3 types of 3D Modeling

What is Solid Modeling in 3D?

Well, it is a type of modeling where a particular shape or form is being made by the use of CAD software. This technique can be used for almost any product design, whether it is a car or a house. The only thing is that it needs a sufficient amount of skill to do well at using it and a fair amount of time to complete the job.

The best thing about using CAD software to get the results that you want is that it gives you the freedom to experiment with all the aspects of the model and to play around with the way you wish to have everything done. You can change things, like the color of the walls, or even change the whole theme of the scene. You can also change the items that are inside the scene as well as the items that are outside of the scene, and you can experiment with all of this in real-time.

If you are someone who enjoys doing model railroading then solid modeling in 3D will give you the most fun. You are not restricted to what is on paper when you are modeling, because you can get as much fun from building something from your imagination as you could when you were making your model on paper.

You can also get a lot more value out of the money that you are spending if you take your time to create a quality model because most of the time the more complex models are the ones that will sell best. Solid modeling in 3D will help you do that because you will soon see that there is plenty of detail involved in the creation of a good model and that can only mean that you are getting the most out of your money. It might also be something that you can pass on to your child when they are growing up because learning is always a good thing.

A wireframe model is an exact representation of a real-world, three-dimensional object used in 3D computer modeling. It can be a terrain model or anything else you might come up with. It is important to know that most wireframes come with a model viewer program that allows you to experiment with the model.

These viewer programs are extremely useful as they allow you to see how your custom model will look when all the pieces have been fitted correctly, and they also allow you to make changes to the existing model to personalise it.

Some great examples of custom made wireframes are the ones you may use when designing logos for companies, advertising signs and public signage. You can use modeling to create these pieces because they already exist in some form, and if you can’t get your hands on a pre-made model then the next best thing to do is to design one from scratch.

Wireframe modeling allows you to experiment with any shape, colour and style, and because it is so versatile you can build anything from aircraft carriers to ancient Egyptian pyramids.

To get the most out of your wireframe you need to know exactly what you want it to achieve and what limitations exist. Are you looking to create a very basic model or something more elaborate? Is the model going to be seen from different perspectives, both above and below? How big is the model? All these questions should be answered before you begin your experiment.

In the field of engineering and art, one of the most popular ways to design and create model structures is to use computer-aided surface modeling (CAM). This technology uses mathematical equations to design, texture, and also print physical models of complex shapes that include solid surfaces, deformable shapes, hollow ones, soft and plastic ones, opaque and semi-opaque ones, and even solids.

This technology can be used for any kind of structure which is three-dimensional. One can also make a 3D print of the structure to get a replica of the object.

Freeform surface modeling is an application for engineering curved freeform surfaces with a CAM or CAD system. The term ‘freeform’ was first used in 1960 by William Taylor, who defined it as an ‘unfolding surface’. It can be thought of as a geometric shape that has no exact straight lines and is, therefore, more geometrically complex than conventional two-dimensional surfaces.

A variety of freeform modeling techniques are available including surface modeling and also rigid body modeling. Curved surfaces can be analyzed with the help of tessellation. Another CAM technique used is wavelet modeling where different wavelets of differing frequencies are used to change the visual appearance of a particular surface.

Computer-aided manufacturing is the modernization of traditional manufacturing methods, and computer-aided structures are one of the most important examples of this. They are generally made of metal, wood, or plastics, and the final products are usually made from durable materials that have been subjected to controlled conditions during manufacturing.

CAM technology can be used to design strong structures which have the potential to resist extreme heat, corrosive, and solidification chemicals. They can also be used to manufacture nonferrous metals, plastics, composites, tiles, roofing shingles, banners, and signs. They can be used to manufacture various kinds of composite materials and even artificial rubbers, plastics, wood, and many other kinds of non-natural and non-metallic materials.

What is 3d Modeling used for?

This is the process of using computer-aided modeling to create a virtual reality or environment that is fully interactive. Think of virtual worlds such as the world that you play in your games or worlds that you can visit in other online applications.

This can also be used for more traditional 3D modeling which involves rendering real objects from within the computer and then using some sort of digital paint. In both cases, you are creating a representation in your mind of the object but it is the actuality of how the computer can recreate this object in cyberspace that is the exciting part.

This can also be applied to video games and movies, where you can virtually walk through worlds and complete tasks and puzzles that will appear to you as if you were part of the characters involved.

Think of this technology as the next evolution of the idea of clay modeling. It has been used in television and film production for years and is finally catching on in the world of visual arts. By using specialized computer software, the possibilities for what can be achieved become much greater. Think of the possibilities of being able to recreate entire cities within your computer, being able to create entire worlds from your imagination, and being able to design virtually anything that you can imagine.

So what is 3D modeling used for?

It can be used to enhance any type of product or idea that you have. If you are designing a physical product such as cars or architecture, you are probably thinking along the lines of the car in virtual reality and this can be applied to the architecture as well.

Think about the new movie iRobot, in which the robots in the future will be walking the streets, just like we are. By using this type of computer-generated imagery, you can bring the real world to life in a completely new way. Think about the potential uses of this and what you can do with it today.

What does a 3D Designer do?

A 3D designer is a person who, with the use of various software, designs and creates things that we see in virtual reality. In this virtual reality, these designers often have to work with some very specialized technology.

When people work as designers on these types of projects, they are often asked to be involved in many different things. They will be required to make models from first sketches to 3D scans of a design, and finally to a final digital product that can be viewed on the internet.

A good designer will know how to manipulate a lot of different graphics programs to make sure that their designs are as close to the original as possible. People who are interested in becoming virtual designers can learn how to design websites and games at schools or colleges if they’re interested. These people can then use their skills to make a great deal of money.

Which Industries Use 3D Modeling

With the introduction of Augmented reality technology, 3D modeling is about to get a big makeover. As the name suggests, Augmented reality pertains to the blending of virtual reality to give you an experience that is as if you were really in the scene.

In this new era of interactive entertainment, virtual reality is fast becoming the next big thing and it’s going to be a major force in video games, amongst other things. Virtual modeling is going to get a boost with 3D modeling.

They will provide the concept of a digital world where they will enable creative minds to work at their best and come up with magnificent results. This concept is all about providing the best possible services through the internet, wherein everything is virtual and requires the least amount of investment.

3D Modeling is an incredibly rewarding activity, where a player can create any virtual object that they fancy by adding simple geometry and basic computer-aided design features.

The need for 3D modeling is growing at an alarming rate in Architectural rendering. There are a variety of tools available, which make the process of designing and rendering very easy.

For successful 3D design, it is necessary to select good software. Here is a list of the top three popular 3D design software

Maya is an application used to generate 3D assets for use in film, television, game development, and architecture. The software was initially released for the Irix operating system. However, this support was discontinued in August 2006 after the release of version 6.5. Maya was available in both “Complete” and “Unlimited” editions until August 2008, when it was turned into a
single suite.

The best part of hiring 3D Modeling Services is that you get everything done without any hard work. However, not all companies can be trusted. You have to choose a 3D modeling company very wisely as your brand reputation depends on the quality.