5G As A Boost For Augmented & Virtual Reality 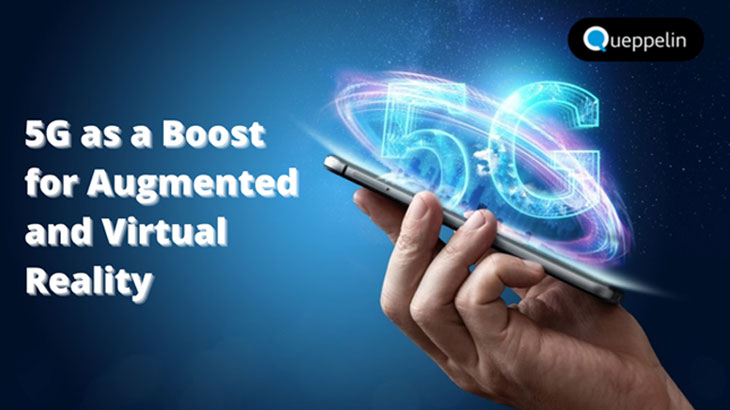 Today, we live in a world where everything is virtual. Most of the transactions that we perform in our day-to-day life now happen in the online world. We can connect with our friends and family from any corner of the world, without having to visit them personally.

This is not all; when the COVID-19 pandemic hit the world in early 2020, most businesses had to shut their offices and adapt to working from remote offices and work from home culture became a new normal. Even in this case, people could not meet each other, but it was imperative to keep businesses running, which was made possible.

However, despite the boundless possibilities surrounding the technology, AR and VR technology is yet to see widespread adoption and implementation. While there are many reasons for this to happen, the most prominent one is the unavailability of stable, high-speed internet services.

Today, in this article, we shall discuss the potential of AR and VR, the factors inhibiting widespread adoption of these technologies, and how 5G can boost their adoption. But before that, let us start with the basics and understand what AR and VR is. Here we go!

What is Augmented Reality (AR)?

We have all heard so many times that augmented reality is the technology of the future and has numerous possibilities. But, before believing that, we must understand what AR technology is all about, to understand its true potential and how it can make our lives easier.

In simpler words, augmented reality is a digital medium that allows you to overlay virtual content into the physical world in a way that makes it seem like the content is physically there. It essentially allows us to merge the physical and digital/virtual world. AR is the real-time use of any information, be it in terms of graphics, texts, pictures, videos, audios, or any other virtual enhancements integrated with the objects in the real world.

An example of AR technology being used can be seen in the IKEA mobile app. Using the app, you can see how a table, a couch, or a shelf would look in different places around your home. The app lets you choose any product from the store’s catalog and see how it would look in your home.

Another good example is a popular gaming application – ‘Pokémon Go’. The game became really popular, and it allowed users to catch their favorite Pokémon characters virtually (superimposed images) in the physical world by looking through their phones.

While these are just two applications, technology can have varied applications in the field of science, healthcare, education, etc., and change the way we learn forever.

What is Virtual Reality (VR)?

While AR technology is surely an example of technological prowess, the virtual reality (VR) concept only takes it a step further. As we discussed before, AR technology lets you add virtual things to the real world and get more insights about the product. But, virtual reality takes you away from your environment into an entirely new space.

This virtual space can be entered using unique electronic gadgets, like virtual-reality goggles that come with a screen or gloves with sensors that enable you to interact with the virtually present objects in the artificial space created using virtual reality technology.

When you wear VR gadgets, you will feel as if you are a part of the virtual space, and every action is happening around you in your surroundings. In some cases, the virtual areas will also come with their own dedicated audio to give you an immersive experience.

Though this is a revolutionary technology, there is still a lot of scope for its development, and it has seen very little adoption so far. However, with the technology around it making significant progress, there are a lot of chances that we see widespread adoption of this technology in the days to come.

When we talk about the adoption of these two technologies, there are several reasons inhibiting their widespread availability. We discuss some of them in the next section.

When any new technology is introduced to the world, it takes its sweet time to evolve and become a better version of the original concept. That is the case with AR and VR, as well. Though AR and VR technology has great potential to change the way we interact with things around us drastically, there has been minimal adoption of the same in the world we live in. There are several reasons for that, some of which we discuss below:

The High Costs around it

Any new technology is expensive! Though AR/VR technology has been around for a while now, it has seen very little adoption, which in turn leads to high costs.

The costs involved in developing an AR-based application are relatively higher than what it takes to create a regular application. Talking about VR, it is far more expensive to create an immersive virtual environment. Because of these reasons, not many people have embraced this technology, and most of them wait until it becomes more mainstream and the costs go down before implementing it.

Understanding of this technology

It’s been a while now since we have seen this technology. But still, very few of us know the actual uses and the capability of this product. While we know that such a technology exists, not many of us know how to utilize the technology for our products and business, and hence, we see less adoption.

The technology is relatively new and hence is a tough nut to crack. It is not everyone’s job to create a perfect AR application or a VR environment. While many companies work on this technology day-in and day-out, only a few of them are able to create inspirational products.

AR and VR are new technologies, and expecting to use them with outdated and obsolete infrastructure is equivalent to daydreaming. The technology needs robust systems and high speeds networks to be able to use it smoothly. But since most of the consumers lack high-speed connectivity at their homes and while on the go, it isn’t easy in the current times to use the technology efficiently. However, with the introduction of new generation networks, it is about to change. We discuss the same in the next section of this article.

Introduction of 5G as a Game-changer!

As discussed above, augmented reality and virtual reality technology require robust network infrastructure to be used efficiently. So far, one of the biggest challenges that have been limiting the usage of AR and VR technology is the slower internet connections that we have always had.

Even today, most of us have access only to crawling internet speeds that make the technology unusable. However, that will soon change, as the world is already welcoming the next generation of the internet, dubbed as ‘5G’. We discuss how that brings about a change, but before that, let us first understand what this 5G technology is all about.

All these years, we have seen the internet and the network capacities evolving to become better and better each passing year continuously. But before we talk about 5G, let us talk about the evolution of the mobile network, in brief.

The Evolution of Internet Networks

Back in the 1970s, when we were first introduced to mobile technology, we had the first generation of data transfer, which came with a maximum speed of 2.4 Kbps. During these days, forget browsing the internet, even calls getting dropped often was a common scenario.

Later, as days passed, we upgraded to 2G systems, which allowed us to send SMS messages to each other and also increased the internet speeds to up to 64 Kbps. The giant leap was when the 3rd generation of mobile networks, known as ‘3G’, was introduced. It was the starting of the change in the internet speeds, as it was for the first time that mobile devices saw ‘high-speed’ (relatively higher rates compared to 2G) connectivity. The 3G networks delivered newer experiences, including the streaming of standard resolution videos, gaming, faster downloads, etc. It had speeds of up to 7.2 Mbps.

Then came the fourth generation of internet services, known as 4G, which delivered higher internet speeds of up to around 100 Mbps. Though the technology was about ten times faster than its predecessor, it was still insufficient to run the AR and VR applications smoothly without a lag. Thus, there was a need for the next generation of networks to be able to use this technology efficiently.

The Arrival of 5G

As the name suggests, it is the fifth generation of mobile networks. Though the new technology of the internet is already available in some parts of the world, it is still in the nascent stages of development. Most of the countries, especially in the Asian and African continents, are yet to welcome this technology.

However, 5G internet is already touted as a game-changer, as it opens up an entire range of possibilities. 5G networks are designed to entertain up to 100 times increase in the traffic capacity and network efficiency. The maximum recorded speed on a 5G network is 1815 Mbps in the USA, which is significantly faster than 4G networks. However, it is to be noted that it is challenging to achieve such high speeds in the real world scenario.

Nonetheless, the average commercial 5G speeds are more than sufficient to support the smooth functioning of AR and VR technologies. And we also know that with evolving technology, we will soon welcome the sixth generation of networks, which will further improve the AR / VR experiences. However, for now, 5G networks are well equipped to support the new technologies.

As we discussed above, AR and VR technology needs higher data transfer rates, bandwidths, hardware, and performance to be able to function efficiently. Since this was not available so far, the AR and VR technologies were not so widely adopted in the industry.

However, with the arrival of 5G technology, it is all about to change. As mentioned before, 5G opens up a whole new world of possibilities, and it enables all the AR and VR applications to run smoothly without a lag or delay. With the improved experience it offers, more and more people are expected to embrace this technology and implement this technology to improve their businesses and also their personal experiences.

In this article, we talked about how AR and VR technologies can deliver a newer experience to people across the world. It has the potential it has to transform businesses completely if appropriately implemented.

While this technology was not widely embraced so far due to an inferior experience led by poor internet connectivity and speeds, the arrival of 5G technology is expected to change the game for AR and VR.

The 5G networks are entirely compatible with AR and VR technology and are capable of delivering seamless and lag-free AR and VR experiences. In other words, 5G is the much-needed breakthrough that AR / VR always needed, and it will certainly improve the adoption of augmented and virtual reality technology in the days to come.