Apple, Gaana and Others Are Making Efforts to Combat Spotify In Indian Music Streaming Industry 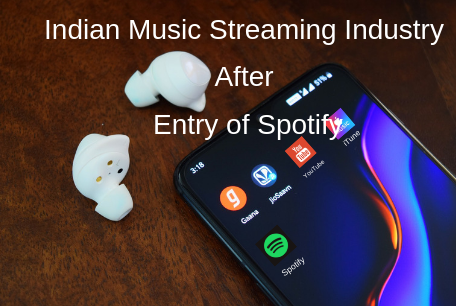 Amid tough competition among global music streaming service providers as well as local music streaming service providers, Indian Music streaming industry is going through a huge change. As soon as Spotify entered the Indian Market in March 2019, it created a ripple of changes in the marketplace. Every player in the industry is confined towards bringing new changes in context to features, plans, and offerings to allure new customers as well as to retain the existing customers.

Apple reduced the cost not only in the US but also in India in order to keep pace with the competition. Some local players in India are also implementing changes in their subscribing rate and features.

To combat the competition, YouTube has launched its paid subscription and app, YouTube music in India. The monthly subscription rate of YouTube Music is Rs 99/month and YouTube Premium is Rs 129/month. It will embed the following features:

Now users can toggle between other apps while listening to their favorite track, they can even chat, and listen to music in lock mode.

The offline download can also be done on payment of Rs 99 per month. Users can get 3 months’ free subscription to YouTube Music Premium as a special introductory offer from the company.

There Are Unmatched Verities of Songs: Claimed By YouTube

YouTube Music includes official songs, albums, live performances, music videos, loads of playlist and artist, remixes and many more. The company claims that the vast collection cannot be found anywhere else and is organized in a personalized manner.

After cutting down its price for paid subscribers in the US, now Apple hopes to attract Indian users by lowering its rate in India in order to keep pace with its rival Spotify. Its monthly subscription has been reduced to Rs 99 from Rs 120. It made changes in its other packages as well:

Changes will be available for both existing and new subscribers. Apple is also concentrating on enhancing its services especially for Indian Users with playlists featuring local music and includes regional languages such as Tamil, Malayalam, etc. Users can also access 14 localized radio stations along with songs from Saregama, T-series music, Zee music, Sony and Universal.

Despite the huge competition and major changes in Indian music streaming industry, Gaana is still the most popular music streaming app. To maintain its popularity, it has also lowered its rate by 70%.

JioSaavn is no more an exception and followed the same concept to maintain its user count in India. It has brought down its annual subscription fee to Rs 299 from Rs 999 and its monthly plan is Rs 99.

Spotify made a dent in the competition not only with Apple but also with other players in India. With the introduction of YouTube Premium services, Gaana and JioSaavn’s subscription rate decrement, we may get some more changes to Indian Music Streaming Industry. We will keep posting regarding the same. Till then you can check out our some other blogs on Augmented Reality, Mobile apps, and more.

PreviousHow “Wheel of Fortune” Could Be Used To Teach English
NextArtificial Intelligence: How Far Is It Good For Humanity

How AI impacts your everyday life?